This is an example of a research-experiment made at FabLab RUC. The project was done as a part of the Computer Science course Programming Interactive Experiences, which is about researching through (interaction) design. That is; to design with a purpose of learning something. In this case, designing, programming and prototyping an interactive experience with a scientific purpose. This is an approach inspired by Dunne & Raby’s (2013) “Speculative everything”. They suggest that designers should not only solve “How to”-problems, but suggest new ways of living. The scientific question is “What if …?”.
In FabLab RUC we love to dream and make technologies for the purpose of trying to understand the future, rather than design for the status quo. The project presented below is made through this kind of experimental approach. It asks “What if long-distance communication was haptic and not text?”

Throughout the process of designing, prototyping, testing and relating the concept to other similar design, we found new knowledge about this (relatively unexplored) area of interaction design. This post is written by Jakob and Alberte who were part of the group working on this project, and are currently also working at FabLab RUC.

At first, we discussed the notion what if you could feel data? and quickly started experimenting with vibration motors (as something to feel) and how to control a vibrator through the internet (to represent some sort of data). In this way, we started learning about publish/subscribe patterns and how to implement these. This was achieved by using a MQTT-based library (learn to use MQTT here). At first, we communicated with the microcontroller through a web interface using adafruit.io. When a slider was moved, the microcontroller got a subscription-message and changed the value of the vibration power. This is where we realized, that this could be used for communication, since one person could communicate to another through vibrations. From here, we focused on creating a haptic communication device for long-distance communication.

We tried out this form of communication, by having a member of the group strap a vibration motor somewhere on her body for a day, while the rest of the group would send her vibrations.

Through this little experiment, we learned that this was not a very ‘playful’ interface and that there was no sensation of being communicated to, since you didn’t know where/who the vibrations came from. Instead, we experimented on how to achieve a playful, meaningful and intuitive interface. We hypothesized that the user that received the vibrations needed to have a way of answering the vibrations.
The next experiment was on how to control the messaging with the device itself. This could be achieved with a button press, that released a publish to the MQTT-broker. This made it possible to make a second device with the same features: Vibrations that starts when receiving a value and sending values to the counterpart through a buttonpush. Through sketching a simple haptic device without a specific purpose (apart from research), we drifted into a concept that was specific in trying to create a new experience between people. In this way, we found the research-question and problem area through designing. From here, the research question became: What if long-distance communication was haptic and not text?.

We then made a prototype of the concept with the two pushbutton devices, to test the design and try to come closer to answering the research question. This prototype was two small boxes (lasercut from this file) that could be attached to your arm. 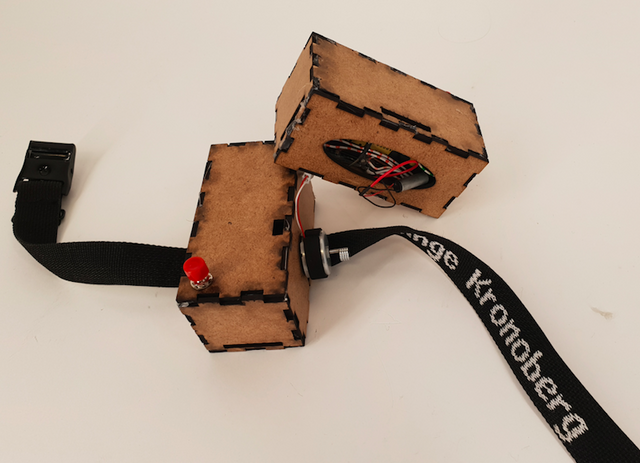 The box had the button and the vibrator soldered on to a Wemos board (all microcontrollers with WIFI could work: check our guides on Wemos and ESP32). This first prototype could only send vibrations of a preset length. The prototype was tested in the group and though the vibrations were fun for a short period of time, they didn’t make sense and were perhaps more annoying than fun.
From this, we decided to change the interaction, so the vibrations where timed to the length of the button press, i.e. if person one pressed the button for 4 second, person two would receive a 4 second vibration (and vice versa). Again, we tested this within the group and found this was way more playful, since you truly felt that there was another person on ‘the other side’ – an actual connection was established. Since we’ve only tried this on ourselves, there is no way to know how this would work for other people with different relations.

This Research through Design-process sparked numerous research-topics, comparing the device to other scientific works. One explores how the ambiguity of the vibrations could actually create meaning for people in a close relationship, while another explores how a different interface and other means of controlling the vibrations could create meaning (without focusing on a particular relationship between users).

By examining other devices like the Hedonic Haptics Player, we learned them that more complex and calm vibrations helped users of haptic systems to create some meaning. The process of making the device, was a great way of researching what such a system will need in the future. The paper “Meaning Making in Connected Haptics: An annotated portfolio” about the project, found that adding properties like internal complexity through embodied interactions and complex vibrations, could be a way to make the concept meaningful in the future.

Another paper examines other works on connecting long-distance couples, and looks into how it might be the ambiguity of the interaction, that allows couples to play and find their very own meaning in the interactions. This paper proposes that the vibration-device might work for connection between two people in a close relationship, by having features that other works lack.

To read about how to construct the system look at the projects Github:
https://github.com/akjaerh/PIEHaptics
Papers written about the project:
Albertes paper, Jakobs paper