We went through a lot of experiments and science to understand and develop a simple, tasty, creamy & foamy vegetable based drink recipe, that we have published on Instructables.

In this blogpost you can read about a) why we did this, b) about the the experiments we did and c) a bit of chemical and scientific explanations.

You can see all the photos from the process here.

The starting point was to reverse engineer our favourite latte-oat-drink. We wanted to un-box the black box industry processes, and enable everyone to make their own creamy foamy vegan latte. The vegan-wave have in some cases been hijacked as a way to support black-boxing of hyper-processed non-organic foods into green-washed vegan-labelled packages.

A Latte with Milk

Milk does not only come from the cows
According to this blog, "The first recorded English-language mention of a plant-based milk was in 1390’s The Forme of Cury, which refers to Almand Mylke." Also, latte is short for caffè latte, from Italian caffè (“coffee”) + latte (“milk”). And Latte comes from from Latin lac, which means following: milk, something sweet, milky juice, or, poetically, milk-white. Milk refers thus also to the colour, the whitening that microbubbles of air and lipids give to a liquid. We find all this argument enough to use the word: "milk", in plant-milk, all though we don't refer to cows milk. We thus disregard of any EU-laws forbiding companies to call their products "milk" resulting in naming them drink or, rebelliously, mylk. Which falsely gives a branding advantage to the cow-milk-industry.

There are dozens of different plant milks, based on different nuts, grains, legumes and seeds, with different additives, different nutritional values, and very different reactions when entering a hot cup of coffee or tea. Nutrition wise there is more calories and micro-nutrition in eating the whole-plant matter, rather than first turning into a drink. Also the energy that goes into processing, packing and distributing plant milks, is far beyond what is spend compared to just eating the unprocessed grains. Thus our starting point is not sustainability, saving the environment or minimising CO2 production.

We are not vegan, we enjoy good food containing cream, milk, eggs and sometimes meat. Our starting point is that plant milks taste great and can have so many different textures, consistencies and tasts, based on what raw material, process or additives that have been used. They give us a rich flavourfull and sensory enjoyment.

We enjoy plant milk in their own right, not as a poor milk alternative. Cow milk have been perfected through out times by evolution, and to make plant-cow-milk, is to us a form of hybris, and a waste of time.

We chose Oatly's iKaffe as the starting point for our research. It taste great, round, creamy, sweet and it doesn't separate when added to coffee. Oatly iKaffe (literally Oatly in Coffee, outside Scandinavia its branded as Barista version) received a lot of hype and is mentioned in Times Magazine. Also, we focussed on cereal grains, to use locally available rawmaterials.

If interessested in arguments about nutrients and perfecting the reproduction of milk with a strong consumer focus, please check this comprehensive article.

How to make a good Vegan Latte

We learned from multiple bloggers writing about homemade plant drinks, and from a variety of commercial plant milks. We looked at recipes, nutritional label and patents.

Amongst the bloggers, oat and almond seems to be most popular for coffee creamers, but many post about how their milks separate, even before it hits the coffee. It seems that the production circumstances are crucial for the success of non-separating creaming, and that the foaming quality in general is not considered. Foaming is however dearly considered in the many test of commercial plant milks for barista use.

Tests of plant milk in coffee

Many baristas and coffee-enthusiasts have been reviewing plant milks for taste, texture, and foam-ability. The reviews often include milks, that are not available outside their home country, but it does give us an overview of what comercial products are available. Also, some of the gigants as Alpro, Provamel (both owned by Danone), Soy/Rice/Almond Dream (owned by Hain Celestial Group) and Blue Diamond are available globally or in large parts of the world.

Many reviews are unfortunately not assessing the coffee reaction or are content-poor copies of other reviews, but you can look into some of the more rigorous reviews here, here, and here (this one also tests the milks in tea and on cereals!)

The biochemical parameters of Vegan Latte

Mh-mh-mh! a little bit of oil

A lot can be contributed to a little bit of oil. Many aromas are volatile compounds that are more soluble in oil than in water. This means a part of the flavour simply origins from the fatty part of the food. In cappuccino or other coffees with milk, the fatty part of milk also contributes to dissolving aromas from the coffee and prolonging the taste of coffee in the mouth.

The concept mouthfeel is also relevant. The feeling of your tongue's papillae against the palate is an important contributor to the sensory input from food. The mouthfeel is strongly affected by a layer of fat, (which in turn also create another sound while eating - one way of measuring mouthfeel is by recording the sounds of eating) and the addition of approx. 3% rapeseed oil to iKaffe surely changes the mouthfeel of the product to the better.

Clumps in your coffee

Regarding mouthfeel, aggregation and clumping is not attractive neither in one's mouth or visually. Many high-protein plant milks aggregate in coffee.
This caused by a de-solubilization of the dissolved proteins. When pH, temperature or salinity changes, the proteins can denature, often irreversibly and the denatured proteins will often precipitate and clump together. pH-caused precipitation can be avoided by controlling the pH with a buffer system that keeps the pH within a certain range.

Another seperation can happen, when undissolved particles (much larger than proteins) cannot be kept suspended because of a viscosity change (or a initially low viscosity in the plant milk). In this case the particles will sediment. Adding oil and controlling viscosity by heat-treating, so that any starch will thicken, are ways to keep particles suspended.

What does the buffer system really do, and how can we add it?

Usually, when adding acid or base to water, the pH changes quite rapidly. A buffer system is a combination of salts, that makes it possible to add acid or base, without the pH changing as rapidly. It works by having a weak base and its conjugate acid (or a weak acid and its conjugate base) - if this sounds foreign to you, you can start learning here or here. For an example of a buffer system in action, check out the beginning of this video (it continues with a thorough description of buffer chemistry).

In iKaffe, the buffer system is composed of dipotassium phosphate (correct IUPAC name: dipotassium hydrogen phosphate, K2HPO4), and -probably- calcium phosphate. The use of trivial names that can cover multiple compounds makes it impossible to decode the correct compounds from the ingredient list. At least "calcium phosphate" can be any combination of Ca+ and PO43+, HPO42+ or H2PO4+. An buffer system with HPO42+ would be combined with either PO43+ or H2PO4+, as the three ions are each others conjugate acid/bases. We know iKaffe is buffering, because we titrated it: 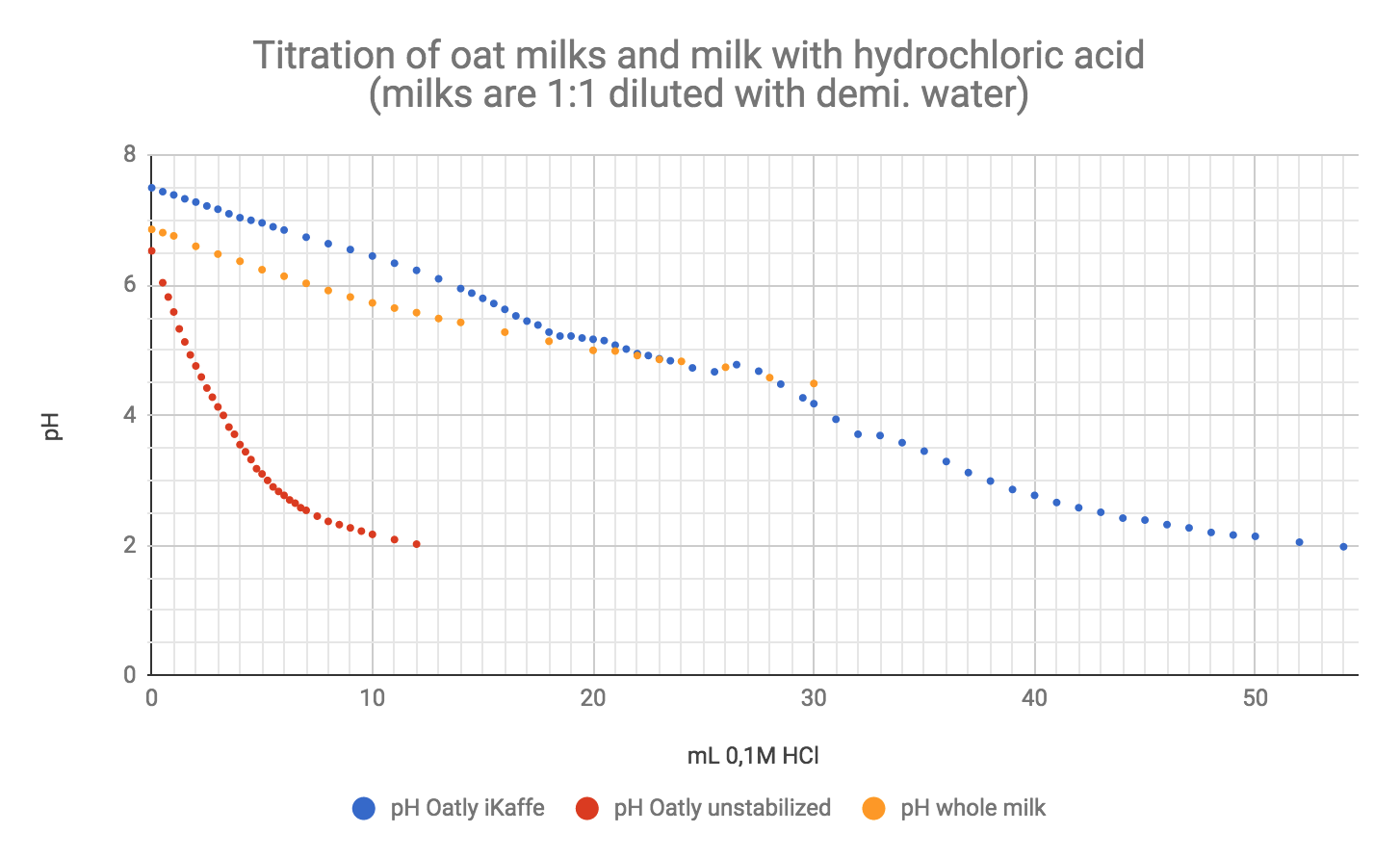 Our own titration of oat milks and cow's milk with HCl, using a pH-meter


If you wanna know more about titration curves of buffers and polyprotic acid (giving off multiple protons), please check this out this happy guy and this page.

Enzymes has an important role in iKaffe. Oatly has a patent on a specific process including protein-glutaminase:

"Dehulled, steam treated oat kernels (675 kg) were wet ground in a colloidal mill at a temperature of 54 °C and directly fed into a stainless steel enzyme treatment tank over a period of about 20 min. (...) About 7.5 L of an aqueous solution of alpha-and beta-amylase (...) was used. (...) The temperature of the mash was kept constant at 56 °C. Protein-glutaminase (...) (687.5 g) was dissolved in 1.5 L water at room temperature. (...) Stirring was continued for about 120 min at a temperature of about 56 °C (...) Any enzyme activity was then destroyed by heating the product to 95 °C. The mash was cooled to room temperature and decanted. (The oat base is then)
transferred into a formulation tank in which rapeseed oil, vitamins, sodium chloride, di- and tricalcium phosphate, and calcium carbonate is added. (...) The formulated oat drink or oat milk is transferred to a storage tank from which it is dispensed for UHT treatment and packaging.
"

Sprouting is a natural source of enzymes, in which (among many other processes) protein are broken to shorter peptides by proteases and starch and fibers are broken down to mono-, di-, and trisaccharides but also to longer chains by amylases. Thus by naturally sprouting the grains we can create the similar reaction that, is used in the industrial production process of this particular oat-drink.

Oatly replicates parts of this process with the addition of enzymes, by which they can control the process - the goal is to have soluble proteins and fibers, but not so strong a degradation that the fibers become too short (loss of nutritional value) or that the protein is denatured or disintegrated to too small peptides (that does not yield a good mouthfeel and foaming capacity). The patented use of protein-glutaminase ensures whole proteins to be more water-soluble, by exchanging -C(=O)NH2 groups with C(=O)O- NH4+ groups). However, the similarities to sprouting are still strong - in both cases there is a increase in the sugar content and a conversion of insoluble macro-molecules into soluble ones.

The enzymatic reaction of protein-glutaminase


Heat & Starch
The heating processes are also extremely crucial. By heating, the structure of the starch polymers are opened and water binds to them - a gelling occurs. The rise in viscosity of a starchy solution after a heat treatment ensures both a nicer mouthfeel (fewer starch-particles) and a substantially slower sedimentation of undissolved particles (so, less separation by standing).

The effect of heating on the viscosity of starch

We started out blending in our kitchen, thinking rolled oats, a blender, a cotton cloth and a bit of oil, salt and phosphate buffer from the beer-brewing shop... that should do, right? Well, no. Adventure we got!

We'll describe the experiments and how we got from a leaky blender, to all the flours in the world (approximately), to heating, sprouting and playing with gellan gum. And we'll describe a bunch of experiments that we didn't do, as the number of experiments exploded as we included more and more factors.