How can we create living permeable membranes in our houses and in the build city design, that turns the current air-tight containers into concentric semipermeable barriers, that allow for environmental, chemical and biological exchange, turning the building into a living organism, with several functional subcompartments.

Not Green, Not Wall - Idea Catalogue

Not Green, Not Wall

A traditional green wall is usually a tray of plants attached to the existing wall. Looking like a green wall, it is more of a wall cover rather than an active part of the building.
It does not matter where the plants are placed, they would do just as good job sitting in the points nearby. So what is the benefit having growth incorporated in architecture? Can plants be a true part of architecture? How can their roots and foliage become integrated within or even create spaces? What if the walls that we built would incorporate pockets of soil throughout the body of wall to allow root system penetrate the whole depth of the wall?

This catalogue attempts to go beyond the concepts of green architecture and hopes to shine a new light on living architecture ideas. 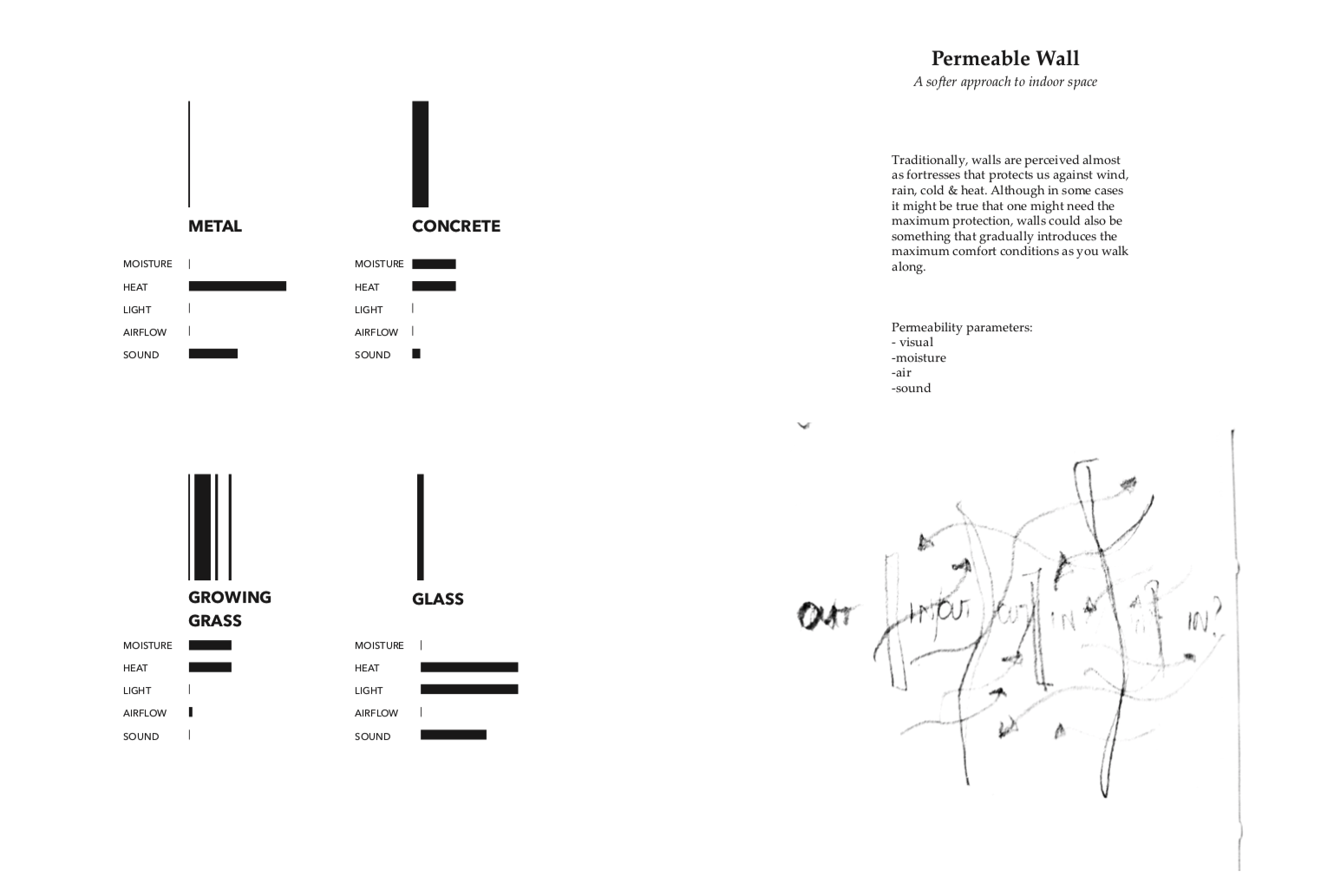 Adding yeast to mud experimenting with creating lighter building brick that also would be biological degradable.

Porous on the inside, solid on the outside. This bread-like structure provides insula- tion through the low density middle part as well as stability through high density outer edges. 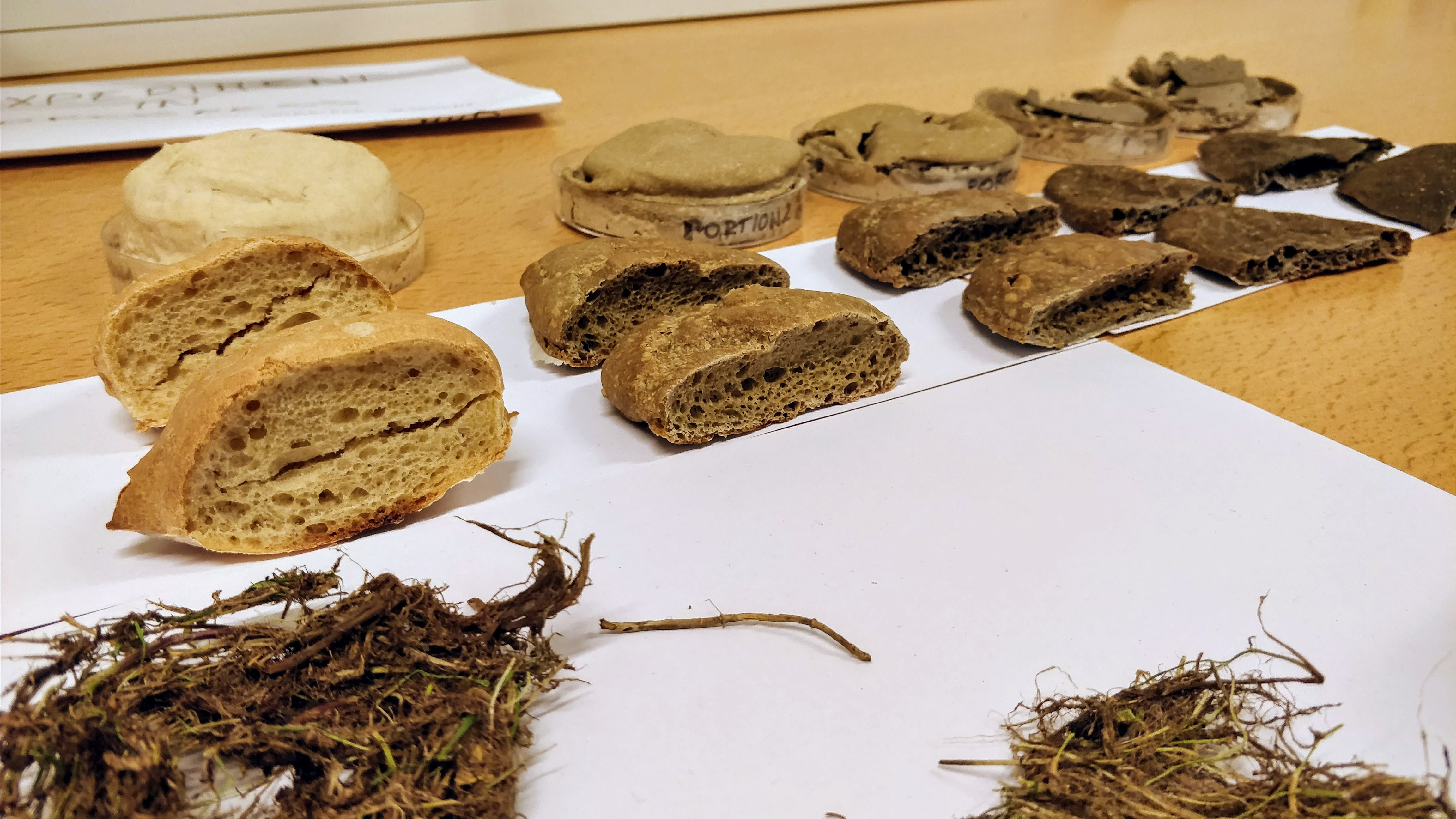 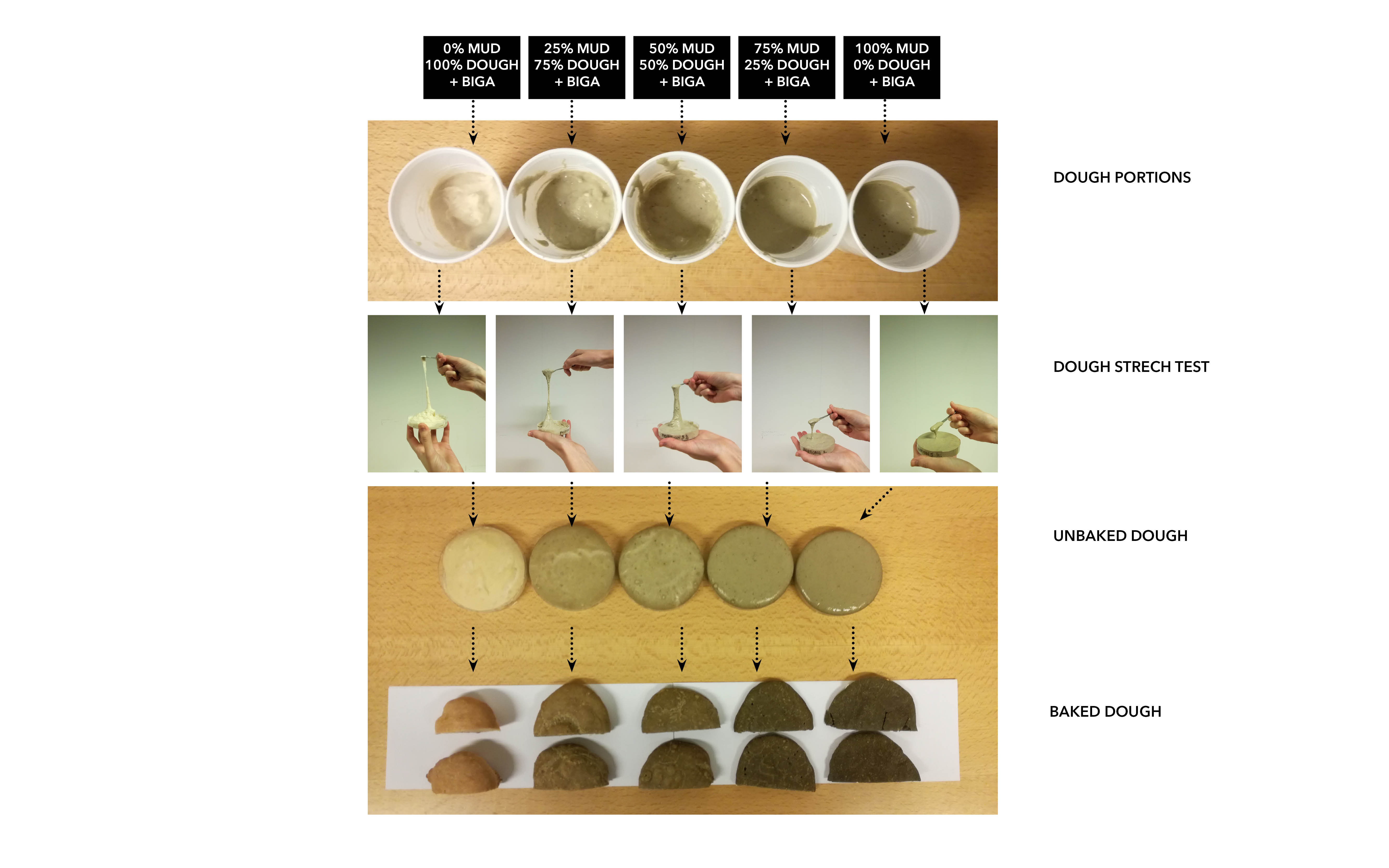 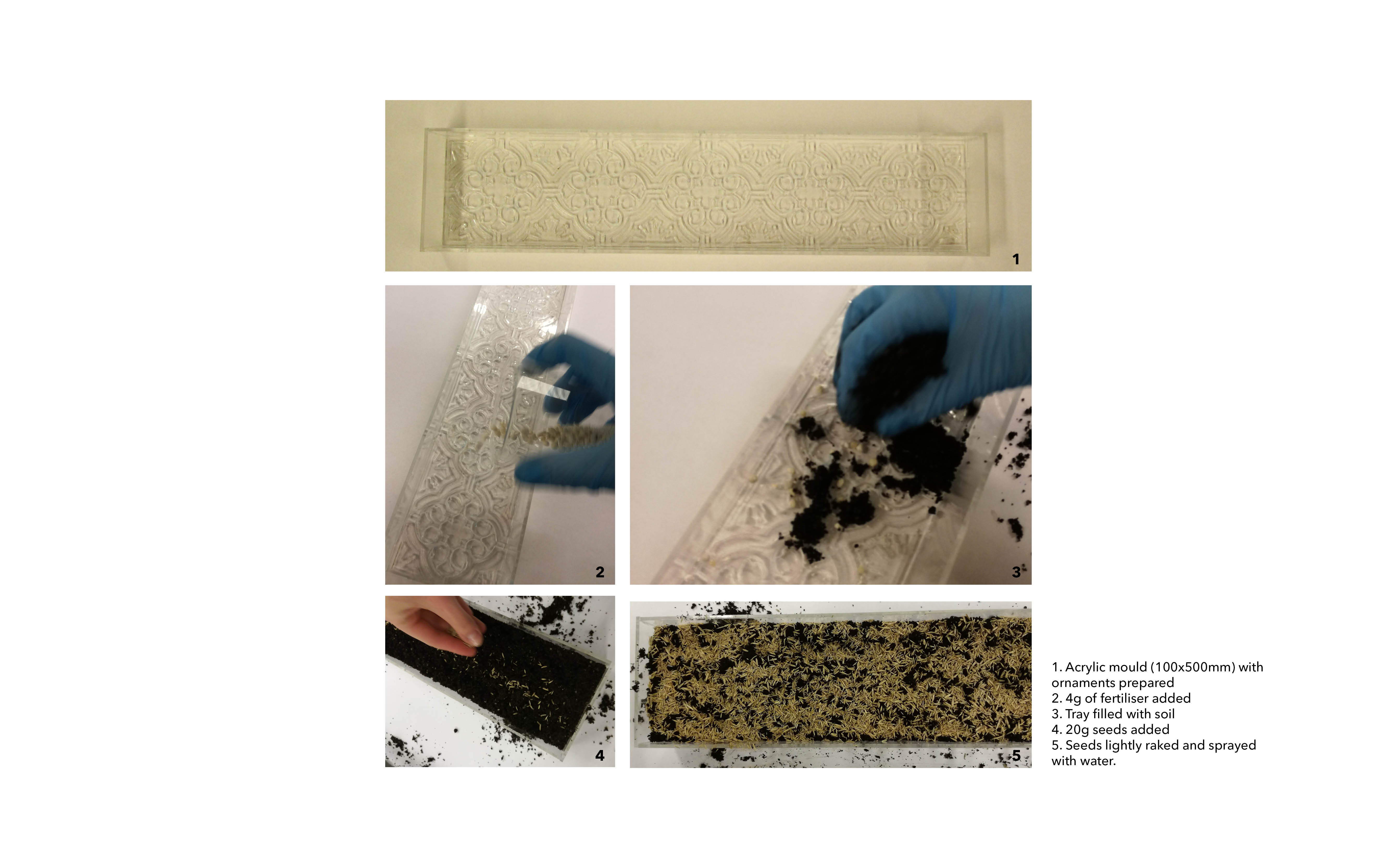 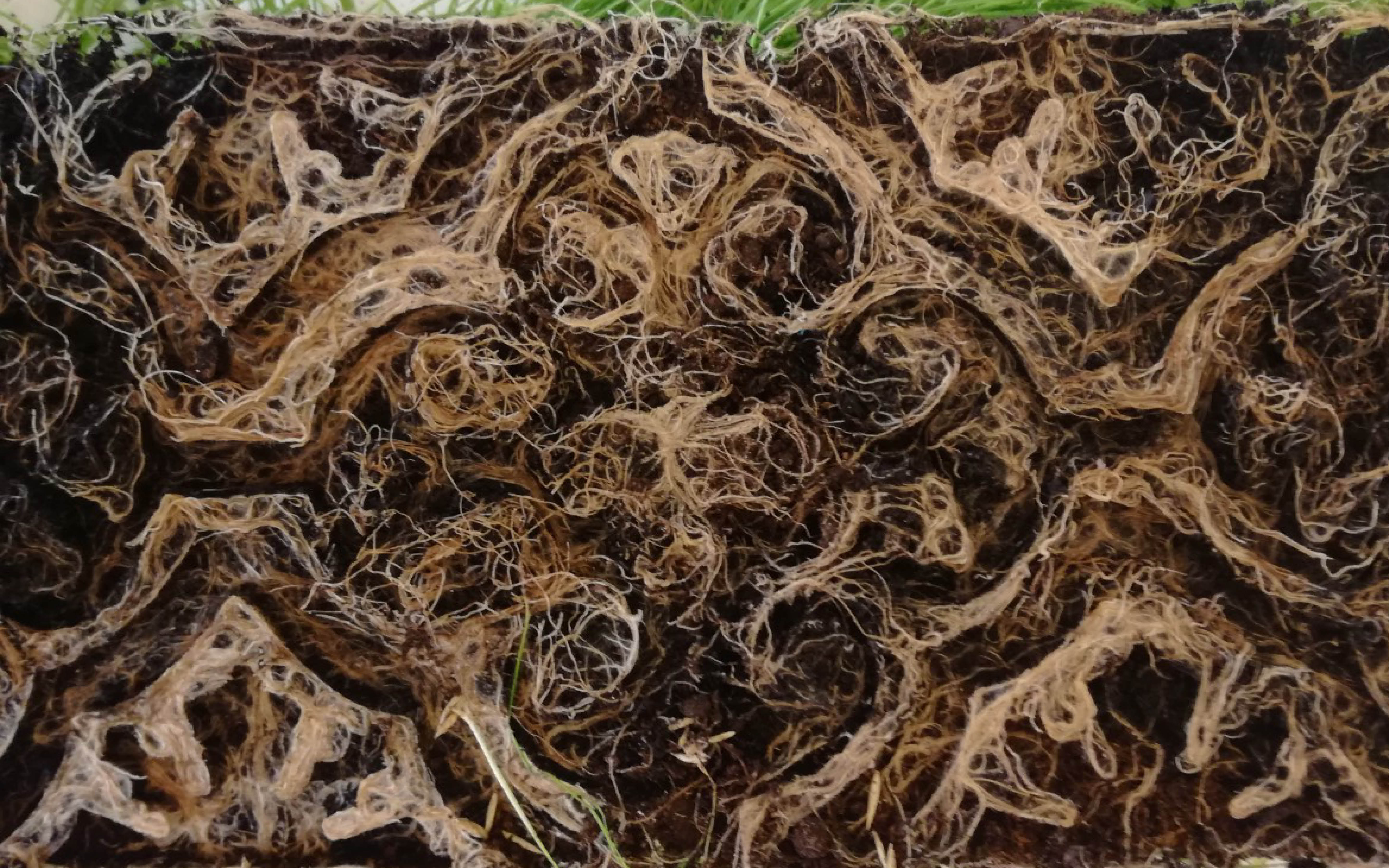 
Today I would like to talk about living architecture. During my internship at fab lab I had a great opportunity to think about this subject, to learn new things and very importantly to unlearn some ways of thinking.

My presentation is called not green, not wall: living architectural barriers.

During last few years while studying and working in architecture field I experienced that notion of architecture is something like this image. Glass and steel structures, perhaps some trendy green roofs with trees that usually look huge on renders but in reality never survive.

The new trend of green architecture appeared in the recent years. One of the hits was and still is the green wall. However, one can question what actual role this greenery play in architecture. I had this wonderful discussion with Malthe about green walls. How is that different than growing plants in the pot? And is it green beyond its colour?

Usually, green walls have very little implication to actual architectural spaces. It is no more than hanging a carpet on the wall.

So what could be a good example of truly living architecture?

About a year ago I visited some rural community in China, close to Gobi desert and Mongolia. Their village was being eliminated in order to make space for two million people city and only few houses were present.

Although you would not think about it immediately, these were the most inspiring structures that I’ve ever seen. Not because how they look or what spatial qualities they have but purely because of what they made of. And although there are mud structures all around the world, this was the first time that I’ve heard how these village people used their architecture.

They would build the walls from mud and straw that was found directly on site. These walls would than stand in the sun, wind and rain for some years during which time chemical reactions would start and these natural compounds would slowly become rich of nutrients that would then become natural fertilised. At some point they would be knocked down and used to fertilise vegetable gardens around the house. They would return to the soil where it came from and the cycle could be looped endlessly.

This was a complete contrast to the way that I was taught that materials are produced. For example bricks, once were clay and other types of soil which was medium for bacteria, insects and other living things. Excavated mud would be processed and fired in kiln for days to become a solid block which does not change its properties regardless time, temperature or weather conditions.

And of course, there is a sense of safety in knowing that materials do not change over time but I think that it is time to open up a discussion if this is the only way of building.

Learning about the powerful properties of mud, I thought that this has a lot of potential to be future materials that is kept alive during entire lifetime of the building.

However, I learned immediately that this is complete opposite of what mud structures perceived as today. If you google mud structure, this is the typical image you get. The mud is material for poor, only used in 3rd world countries. And I would like to challenge this stereotype. I believe that we might have overlooked some extremely interesting properties.

Mud is a great thermal mass. Mud structures absorb humidity and are breathable. Which makes mud structures very healthy to live in.

But how mud structures can be more high tech so they are more suited for today’s needs and construction?

Mud can be 3d printed and that already in itself is an interested challenge because it opens up for many more possibilities and shapes to create. Biota Lab in London is exploring some of these possibilities.

So, how can mud contain all these processes. One of the possibilities would be to create a porous structure. I got inspired by ciabatta bread structure.

I did this very simple experiment where I explored possibility of having homogeneous dough forming porous structure inside and solid structure on the outside. I had this idea that if it was made of mud, the voids could become space for all these amazing processes to happen.

It is possible that a section of a wall would look something like that. It would contain a lot of air gaps in the middle which would provide insulation for the structure and be rigid on the outside.

The challenge in this simple experiment was that mud grain needs to be kept together with some material that has great tensile strength. Something like gluten in bread. Or cellulose in roots.

This is how another experiment started. I was inspired by the fact that in nature tree roots can hold up soil in places like river banks.

I was inspired with artist Diana Sherer’s work where she grew different patterns underground.
I thought that by shaping the way that the roots grow it is possible to create a reinforcement system that is customizable.

My vision for possible application of these ideas is that they are not necessarily strictly walls or floors. They can be soft barriers that control how humidity, sound or airflow is distributed in the building.

Last but not least I would like to share a lesson that I learned. When nature does not like something, it tells you right away. I think this is why for so long it was eliminated from the building environment, because we as humans wanted to the ones telling how things should be. I believe it is interesting time in architecture to see more and more ideas coming up about living things. As an architect, I am interested how we can be in conversation with something that we are not superior to. 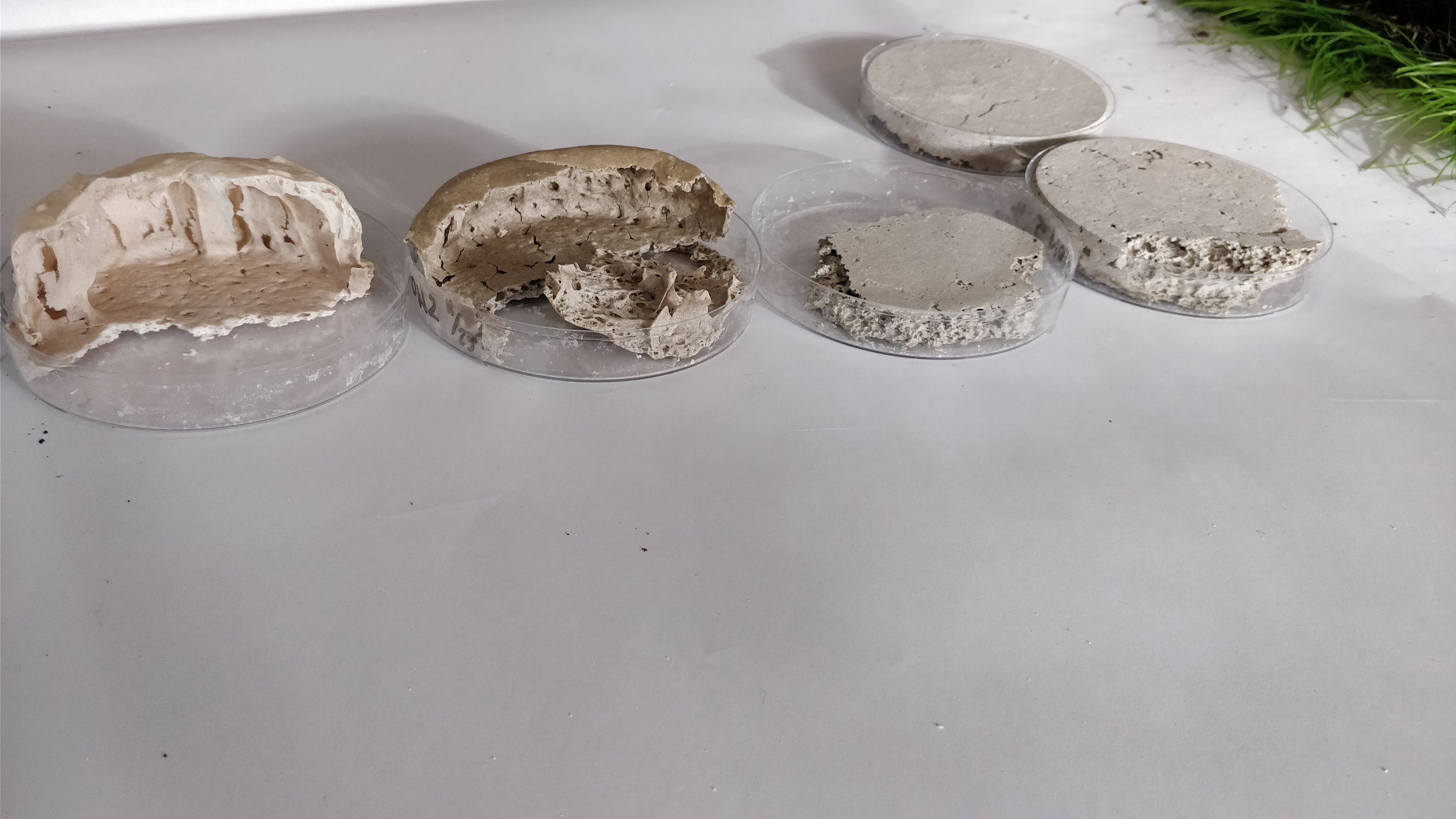 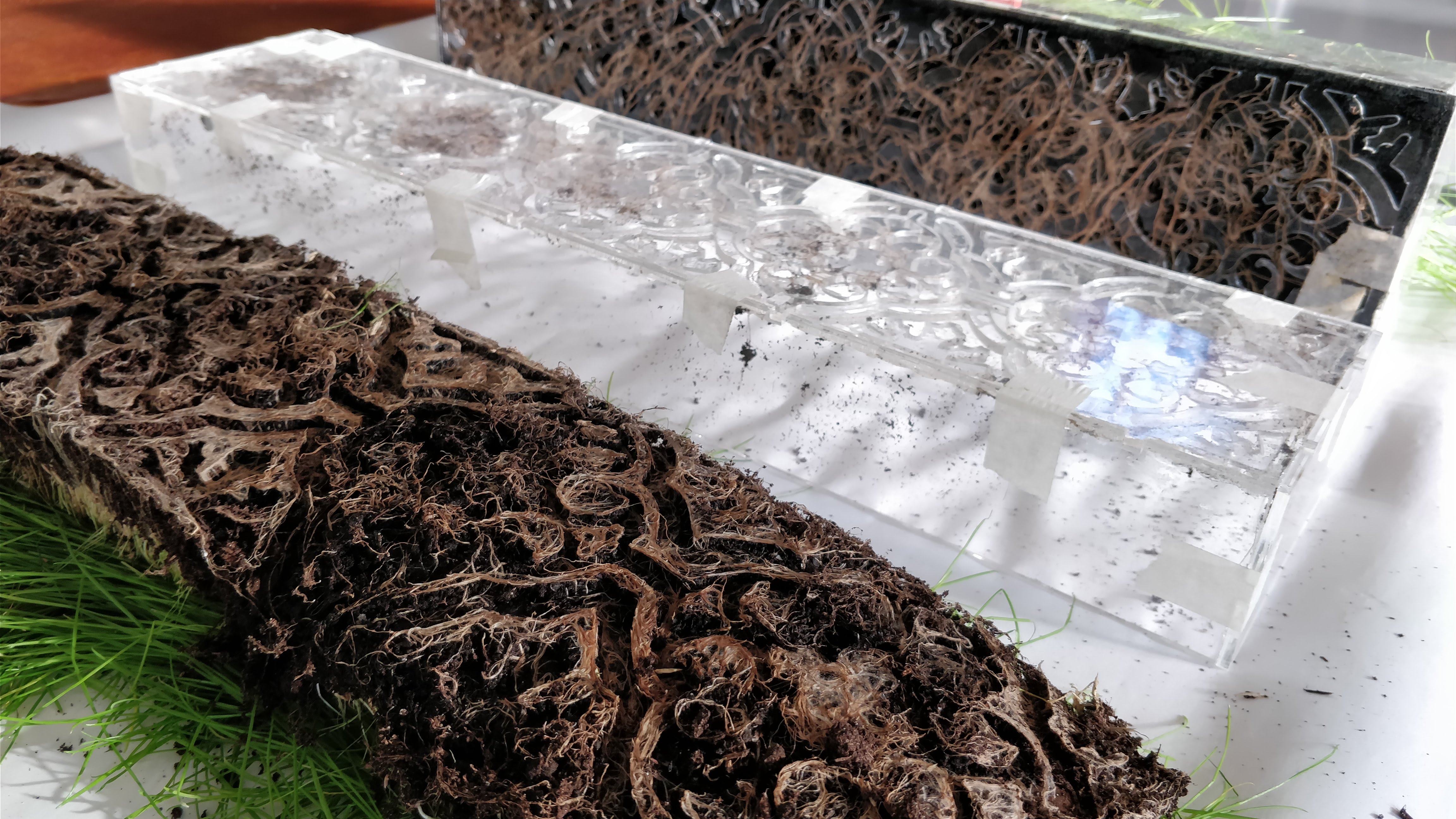 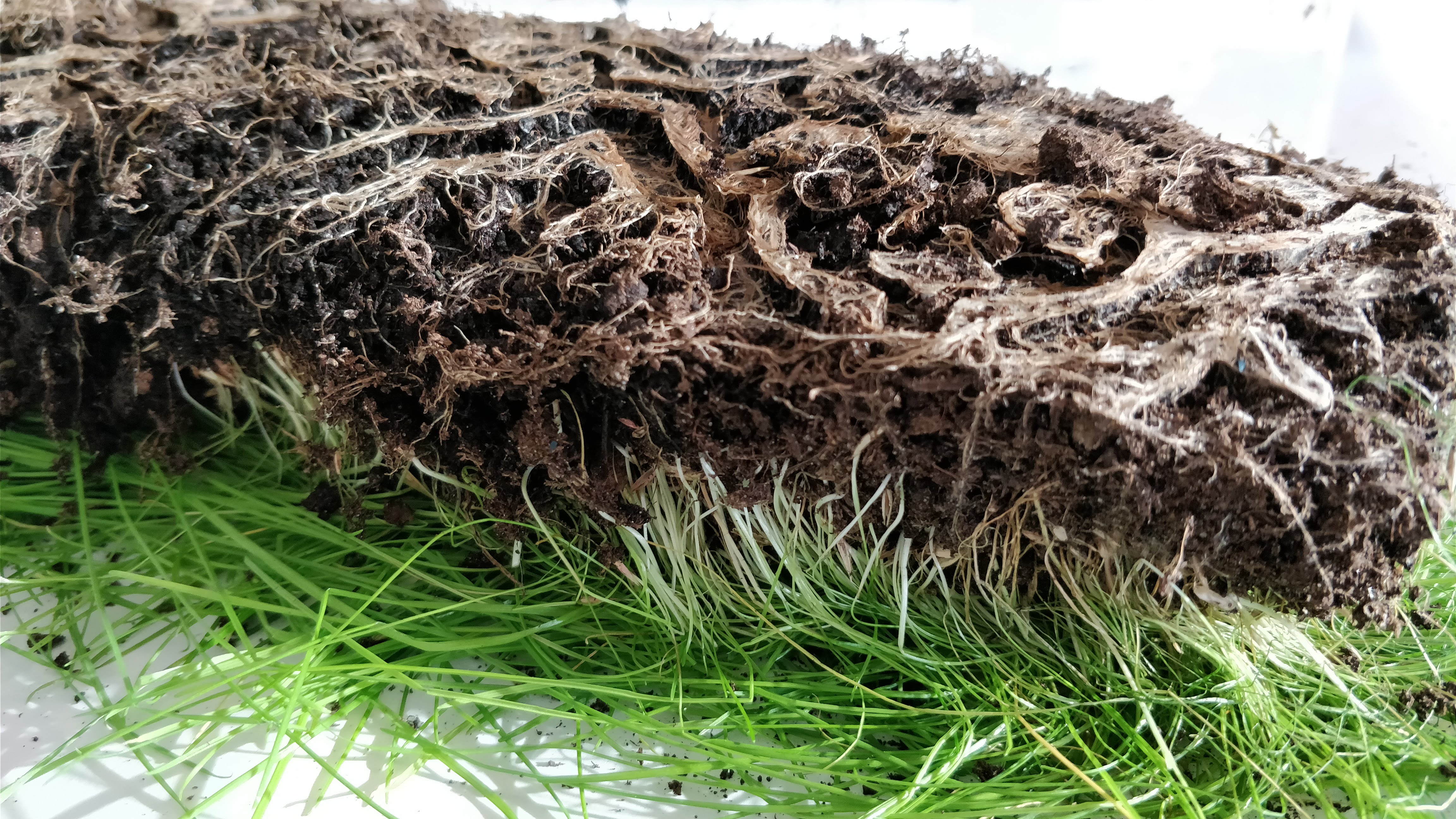 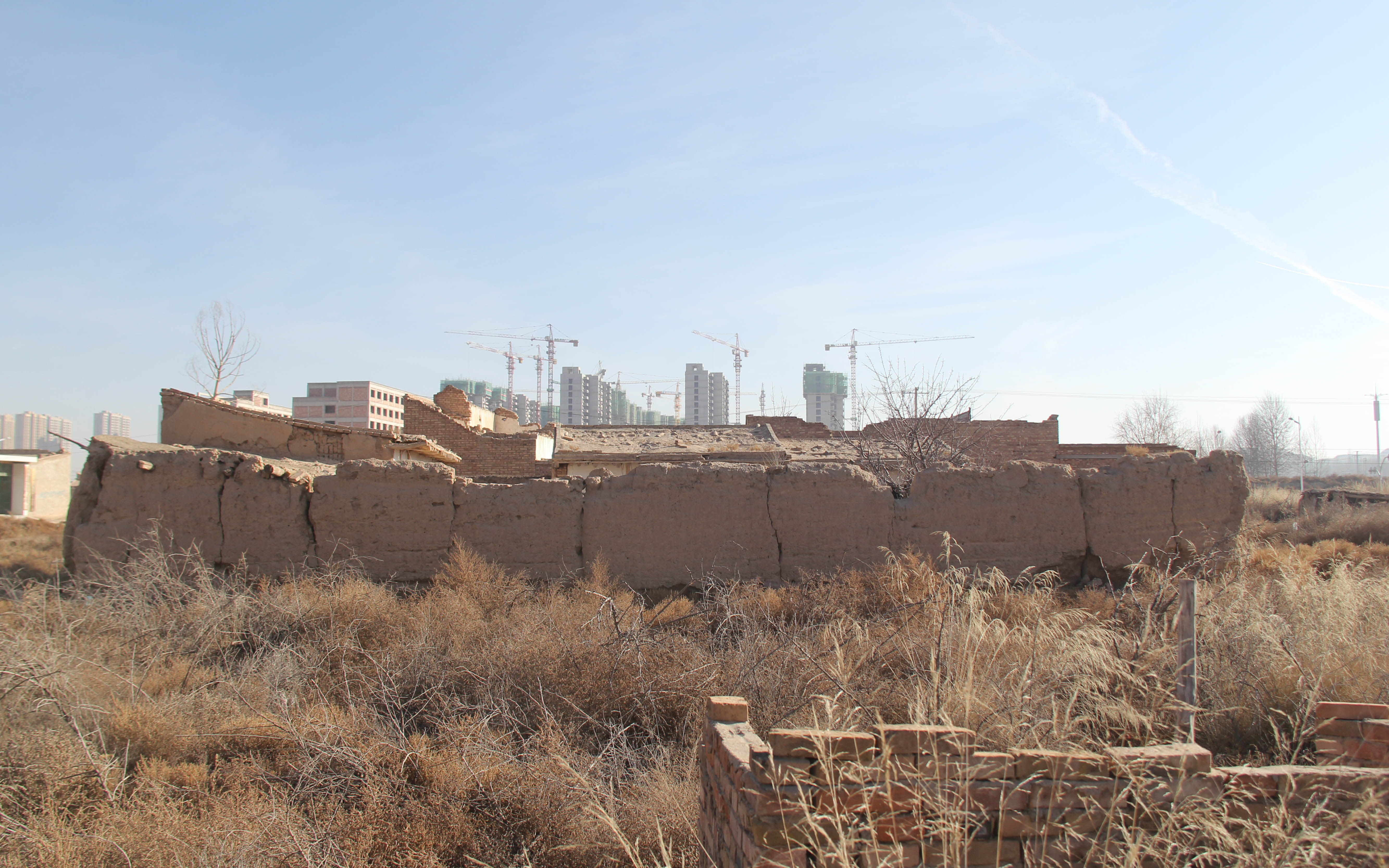 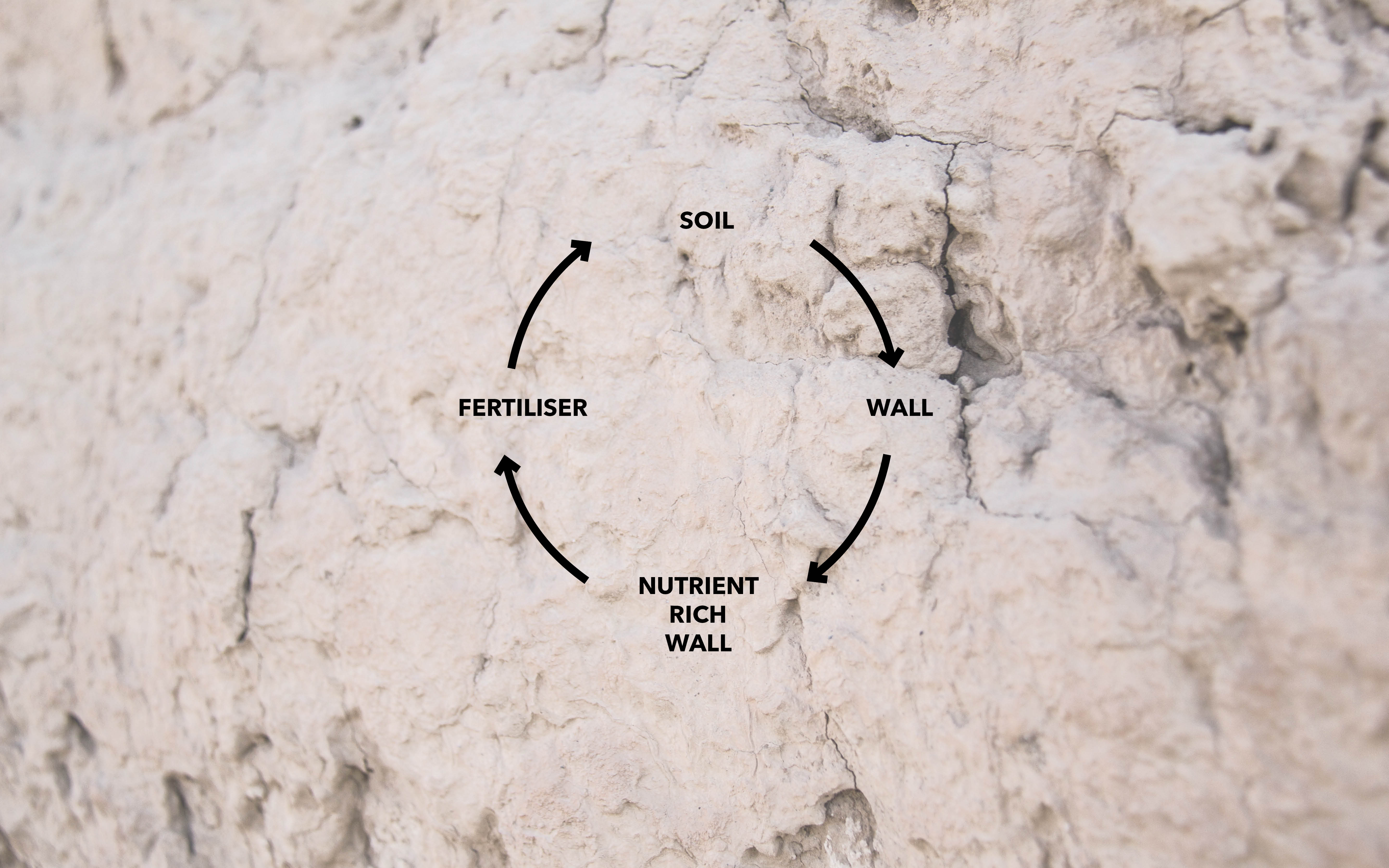