We have been busy at the Fablab pushing the boundaries of the ESP8266 platform. For this, we have made a web interface in which you can control the different preprogrammed light patterns on the chip. The system is 100% embedded in the microcontroller. All you need to do is to upload the software. It will then create a wifi-hotspot. When you connect to the hotspot, a captive portal will appear with buttons and sliders. Further, you can configure it to connect to your normal wifi network and then access it through a web browser.

The purpose of ioGlow is to give a simple platform to learn to program with. We have taken care of all the complicated stuff. This way you only have to focus on programming fun color patterns and making a nice enclosure.

The code on the Wemos controller starts a SoftAP (Access Point), a webserver, websocket server and a DNS server. Any requests to the DNS server redirects to the webpage/ip which the web-server hosts. The web server transfers an HTML page to the browser. The page creates a websocket connect back to the websocket server. When the user presses a button on the HTML page, javascript thus makes a websocket call to the server that a specific button has been pressed. This is registered in a variable that defines which pattern to run at any given moment.

Warning: This way of wiring limits your length of Neopixels to about 30 LEDS. The problem is that the serial chip will drop out if too much current is used for the LEDS. If you have a steady soldering hand we recommend the hack below.

You need to solder three wires from the wemos board to the Neopixel string. Connect 5v to v5, Di to D2 on the board and G to G. Some Neopixels have two data pads DI BI. Solder both to D2.

Important - In the image we use D3. It turns out that D3 is a part of the boot process and it can create interference with firmware upload and bootup in general. D2 Seems stable. 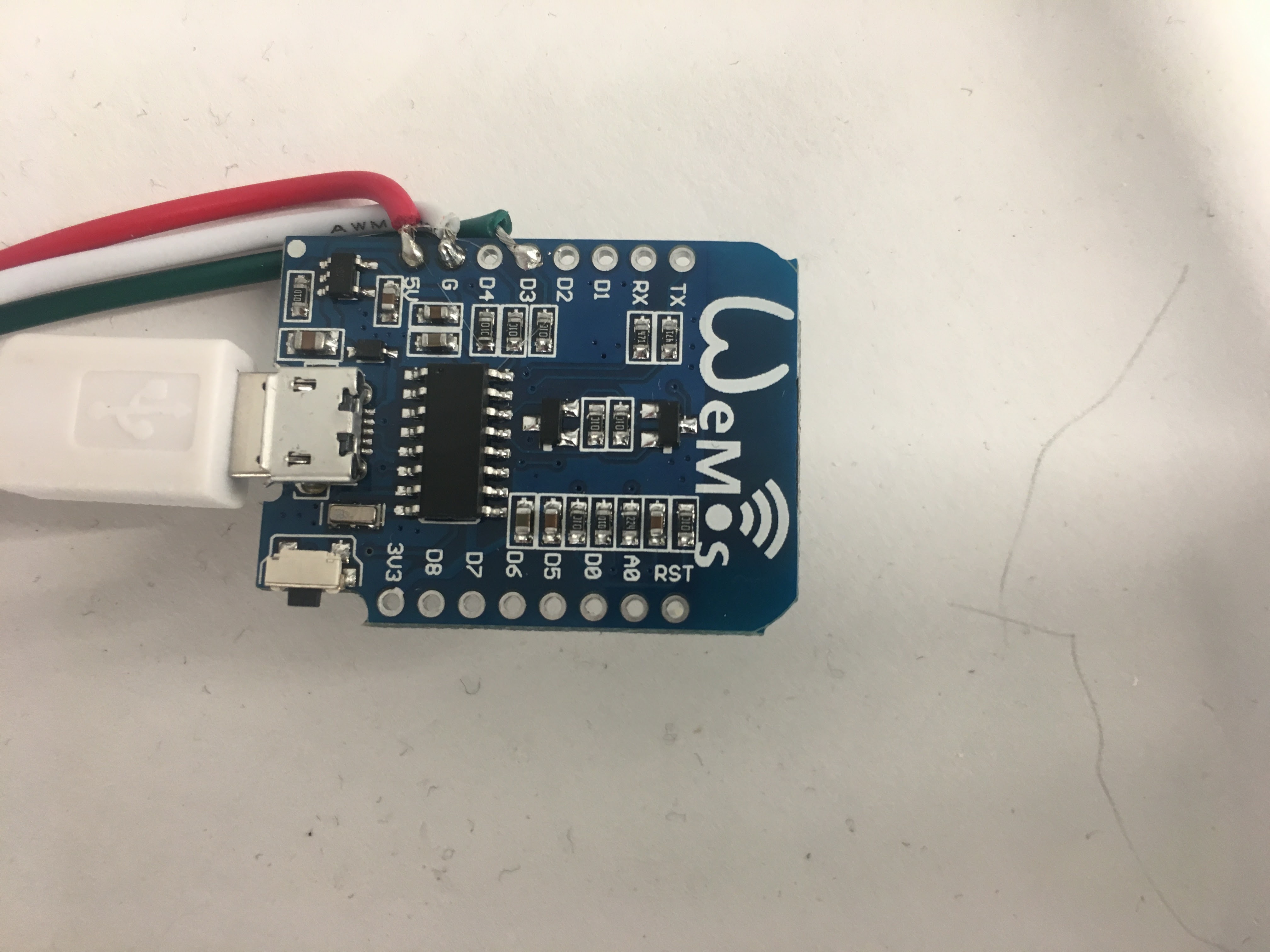 Make sure the direction on the neopixel string is correct:

To get more power out of the USB port we can bypass the diode sitting between 5v pin hole and the USB connector. This can be done by soldering the 5V wire from the Neopixel to the end of the diode. See image below: 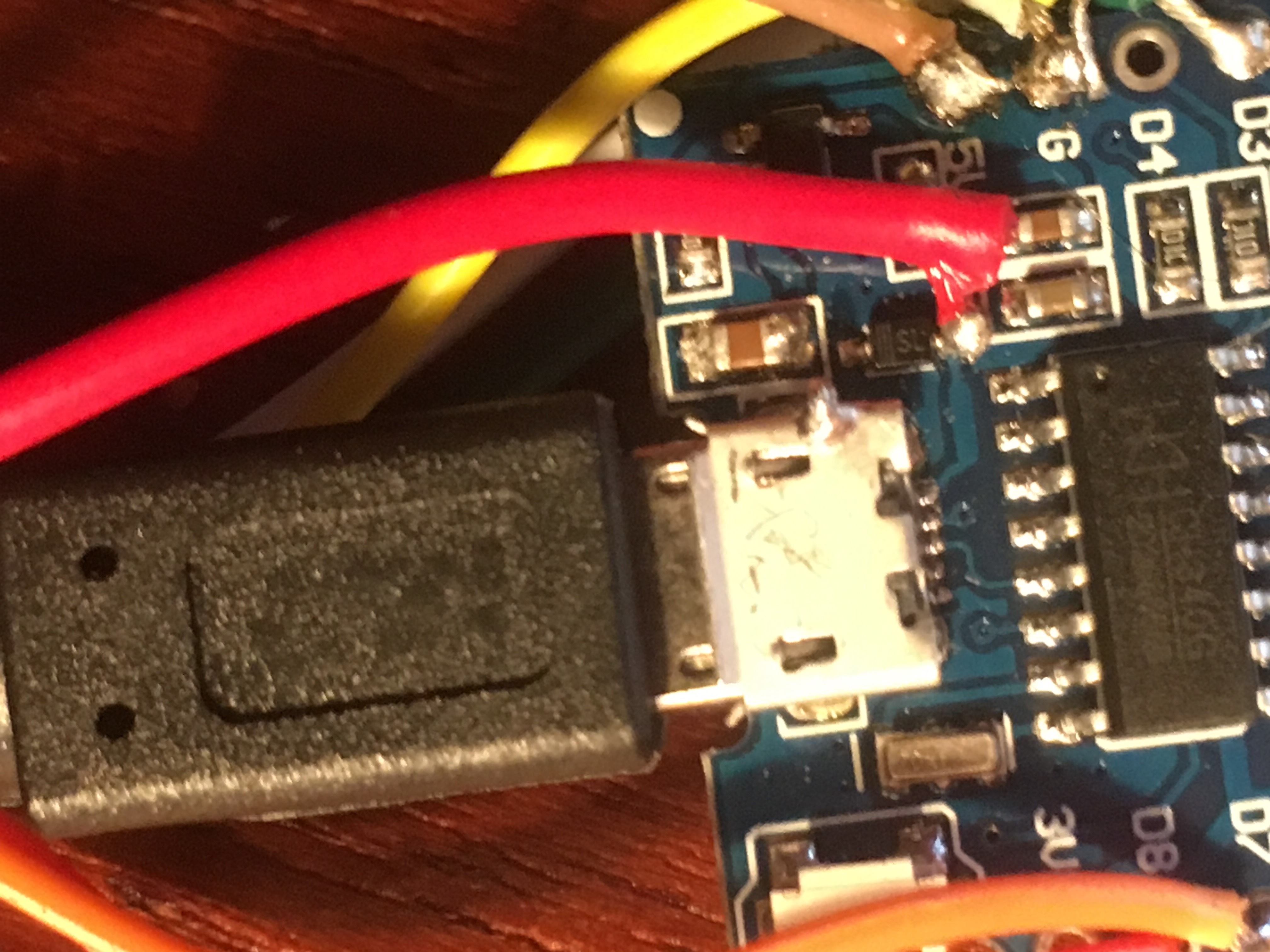 This will allow you to run about a meter at 66% full white before the Serial chip drops out. This is plenty for most use scenarios.

How to solder neopixels:

To be able to communicate with the Wemos board you will need to install the Serial drivers. On the following link you can find the latest driver:

If you have trouble with the MAC driver you can find a later version here that is signed:

Directly from the manufacturer of the Serial chip: 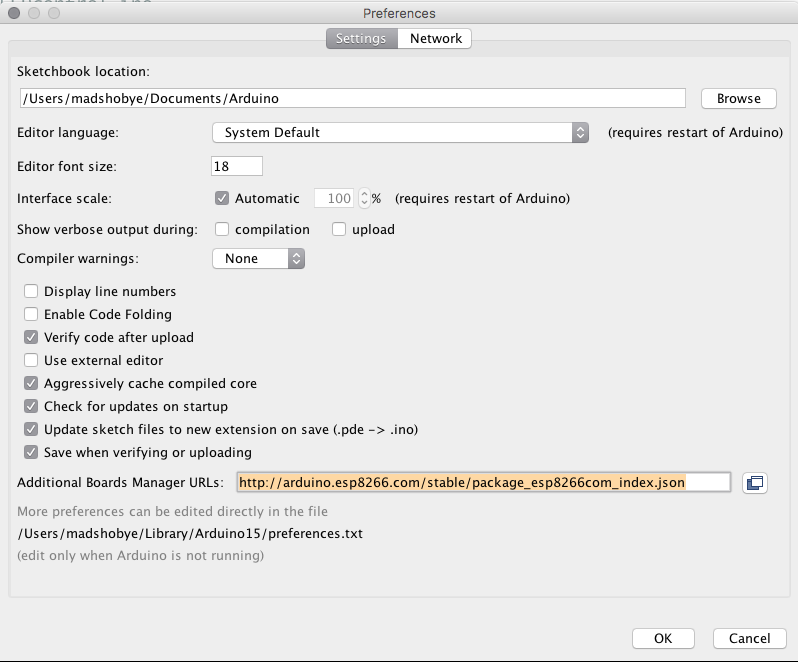 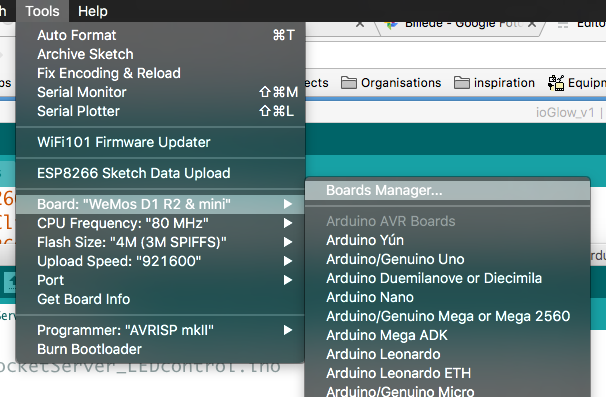 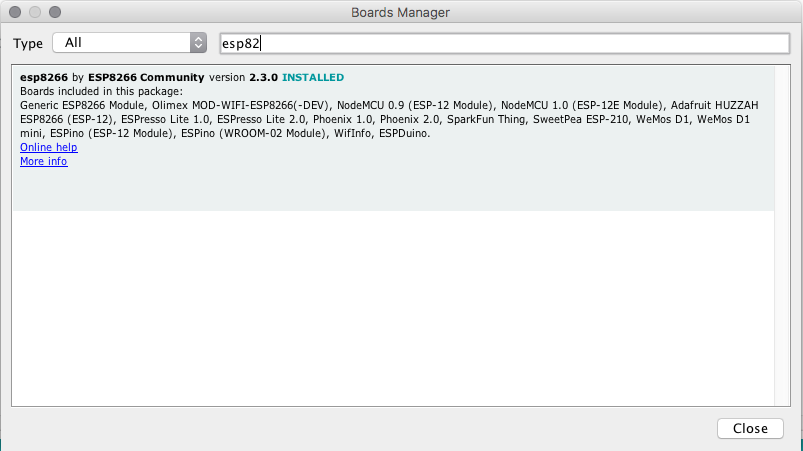 !important use version 2.4.0 because it works with the captive portal part of ioGlow 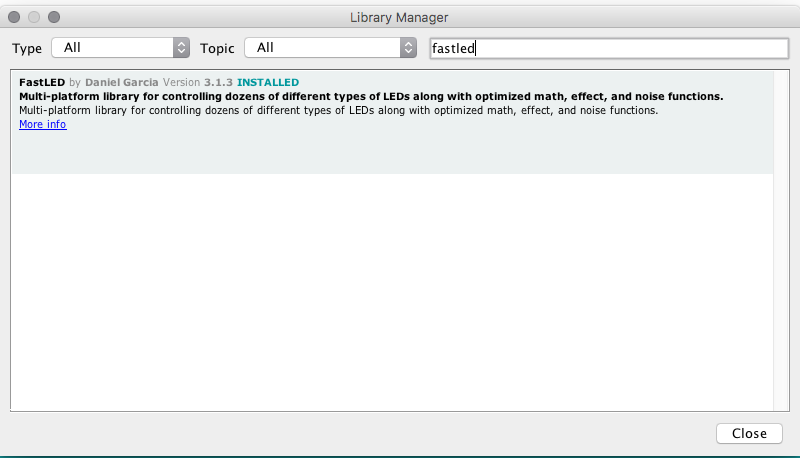 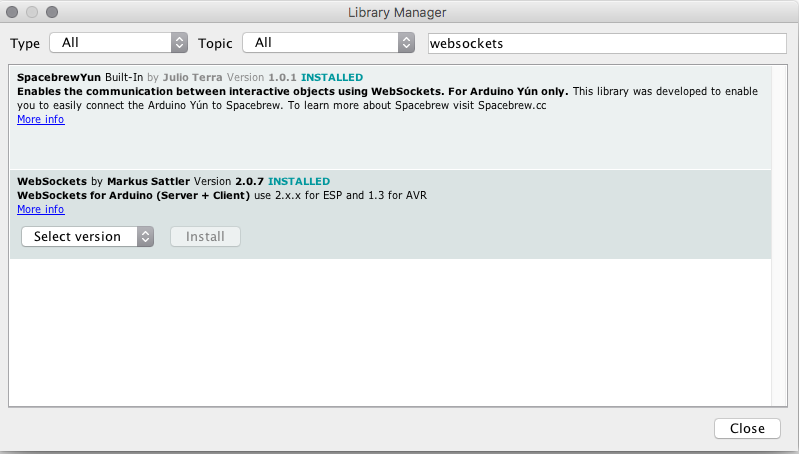 Use the version with the highest number.

IMPORTANT FOR WINDOWS USERS: The files consist of a bunch of INO files. The ino files have to be in a folder named after the IOGLOW version. Thus if it is version one, then the folder should be named "ioGlowv1.ino". Please verify that this is the case before opening it in Arduino. To open in arduino double click on "ioGlowv1.ino". IT IS IMPORTANT TO UNZIP THE FILE (Right click and press extract to folder or something like that).

When opened you should have a window that looks like this: 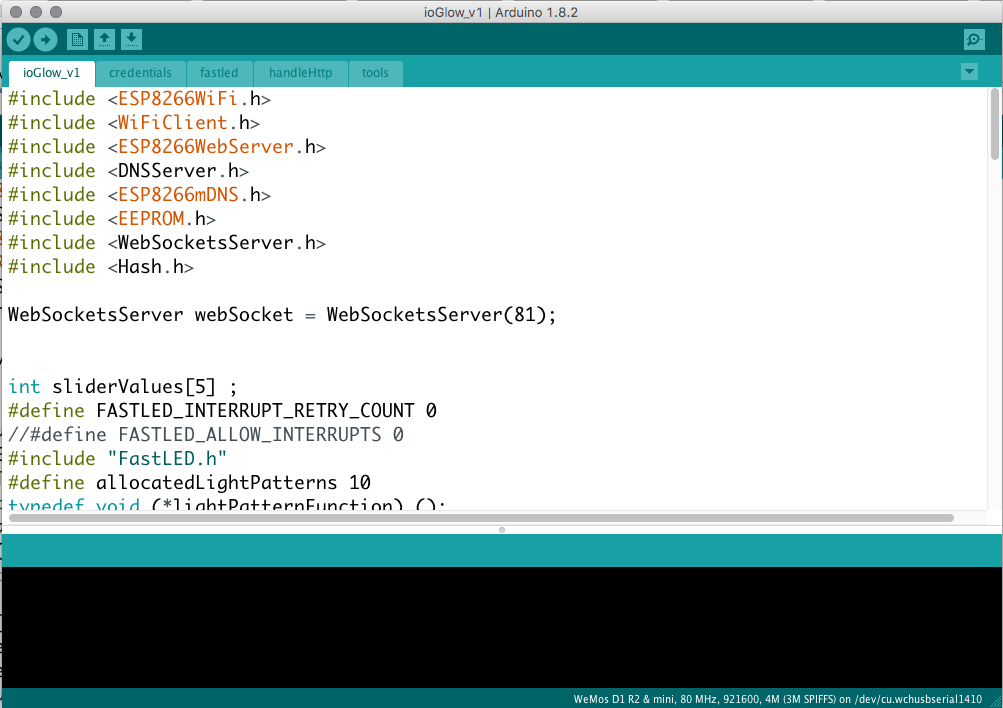 Notice the five tabs (ioGlow_v1, credentials, fastled, handleHTTP, tools). If they are not present, then you did not verify that the foldername was consistent with the main file.

If you are in a classroom with multiple ioGlows then you can change the wifi name to something else so you can identify your Wemos: 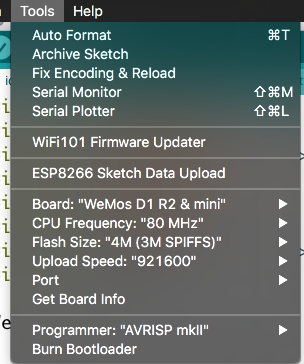 Press compile (the V icon in the top left corner) to verify that you have installed the code properly. If you installed everything correctly, you should get a "Done compiling" below the code. 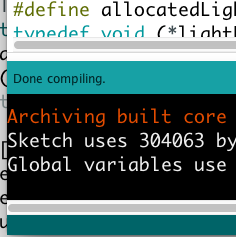 When you compile the sketch, you will get some warnings in red at the bottom of the arduino window: "No hardware SPI pins defined", warning: "serialportsetbaudrate: baud rate 921600 may not work" etc. This is normal, don't worry.

Plug in the USB cable connected to the Wemos board and configure the Arduino to upload to the correct port. For Windows, it will be the highest port number e.g. com6. For Mac, it will be named something like "/dev/etc/cu.wch...". 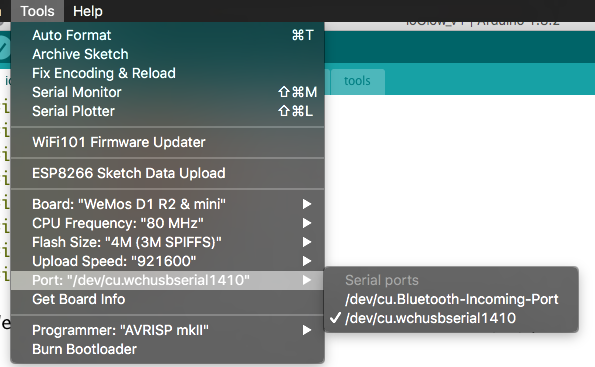 While you are at it, you can also change the upload speed to "921600". It will make the upload significantly quicker.

Now press upload on the button with a left-pointing-arrow icon on the top left corner of the window.

If everything succeeds, you will get a "Done upload" message below the code part of the window.

Open wifi settings on your phone. Find the wifi name oiGlow-xxxxxx. An individual name is created for each Wemos board (to prevent overlapping wifi names in classroom environments). Pick the wifi and wait a few seconds. A portal should pop up with the interface. In this interface, you can also define which wifi it should connect to. If you want to get the interface which connected to your normal network you can go to the url http://oiGlow-xxxxxx.local. Remember to change the x's to the name of you specific devices wifi name. 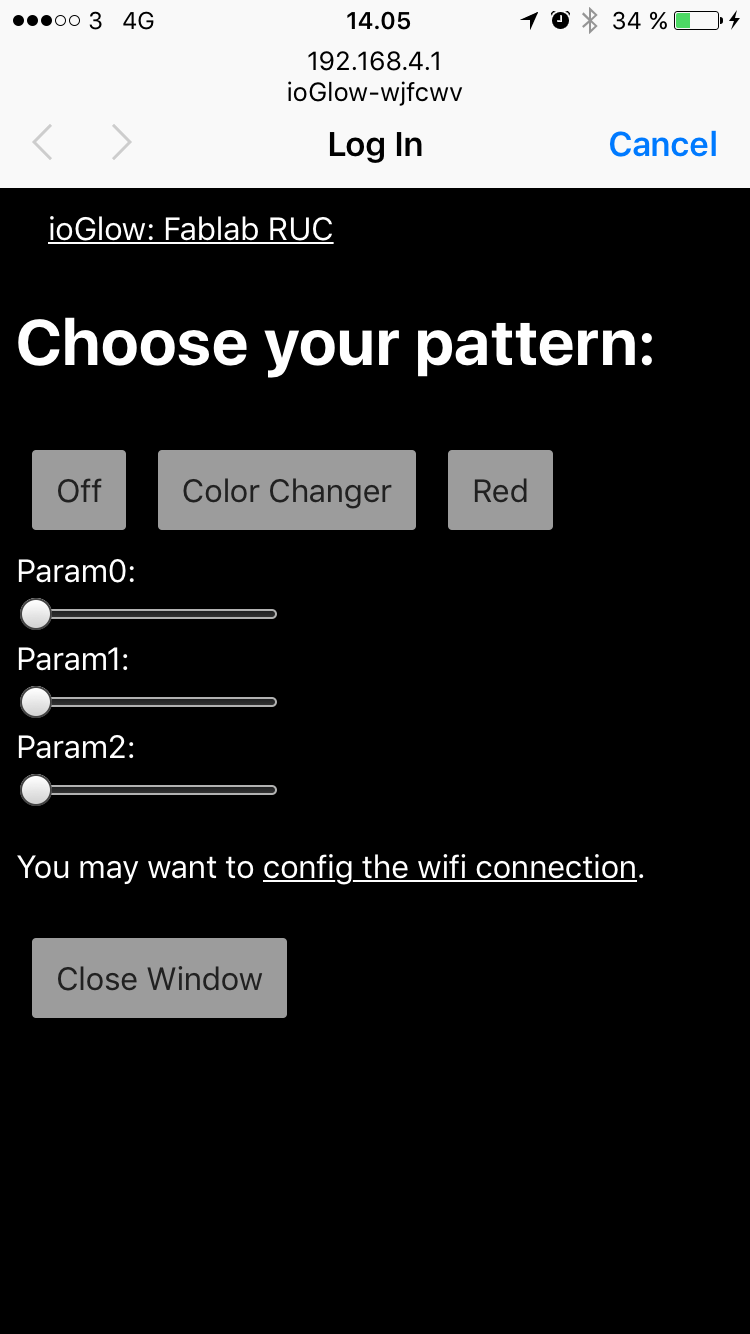 Start programming patterns for the neopixels

Neopixels are versatile light strings where each diode can be controlled individually. Each one has Red, Green, and Blue and can be from 0 to 255 in brightness. Multiple libraries exists to use noepixels. We use Fastled in this case. 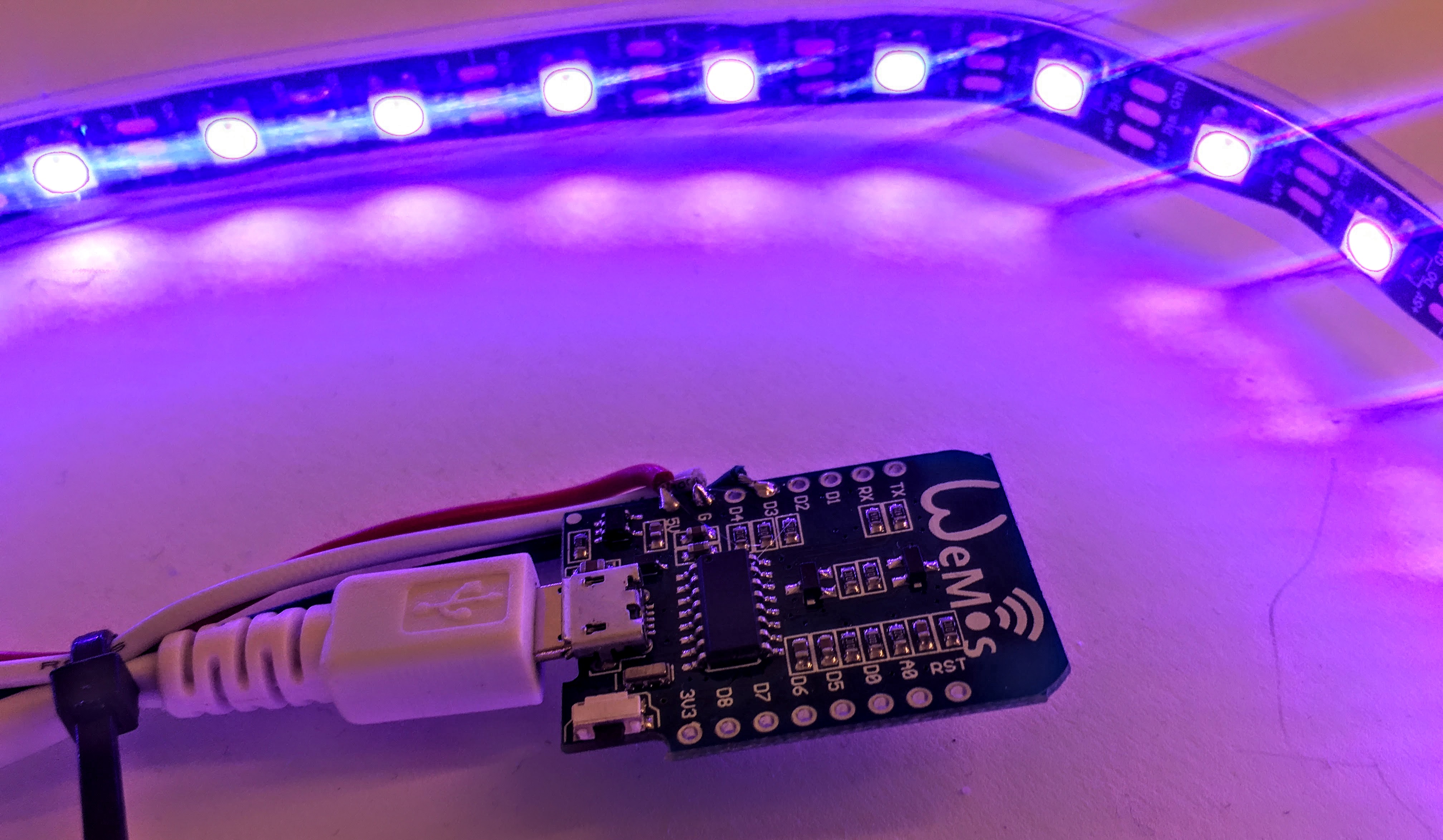 In the code each light pattern has its own method to define the light pattern. E.g. to make every pixel red the following code will do it:

The code runs through every pixel and sets the color to RGB 255,0,0. Which means the full brightness of the red channel and turning the green and blue off.

IMPORTANT: Setting all channels to FULL white e.g. CRGB(255, 255, 255) might fry the Wemos board because it draws too much current.

Adding your own pattern

Let's say that we want a Disco pattern. In the setup method we would need to add a line that would add the disco pattern to the possible list of patterns:

Further, we would need to add a method that the controller can call when the disco pattern has been selected in the webinterface:

Let's say that your disco is the most simple pattern possible. We simply want one diode to be red. Then this command (inserted between the two curly brackets would do it):

If we want the three first leds to be red. We can copy the line and change the index number:

As you might already realize this strategy quickly becomes redundant, thus, we use the for loop to run through them all:

For now, we have only made a red pattern. A simple way to make blinky disco is to add some randomness to the mix:

Notice how we also changed the color mapping to HSV instead of RGB. In the HSV color mode, the first parameter is the color, the second the saturation, the third the brightness.

Getting the values from the sliders in the webinterface

The webinterface has 3 generic sliders that you can use to allow the user to control things like color, speed etc. in real-time.

Advanced color patterns: Take a look at the Reference

The sketch includes time for an HC-SR04 ultrasonic distance sensor. 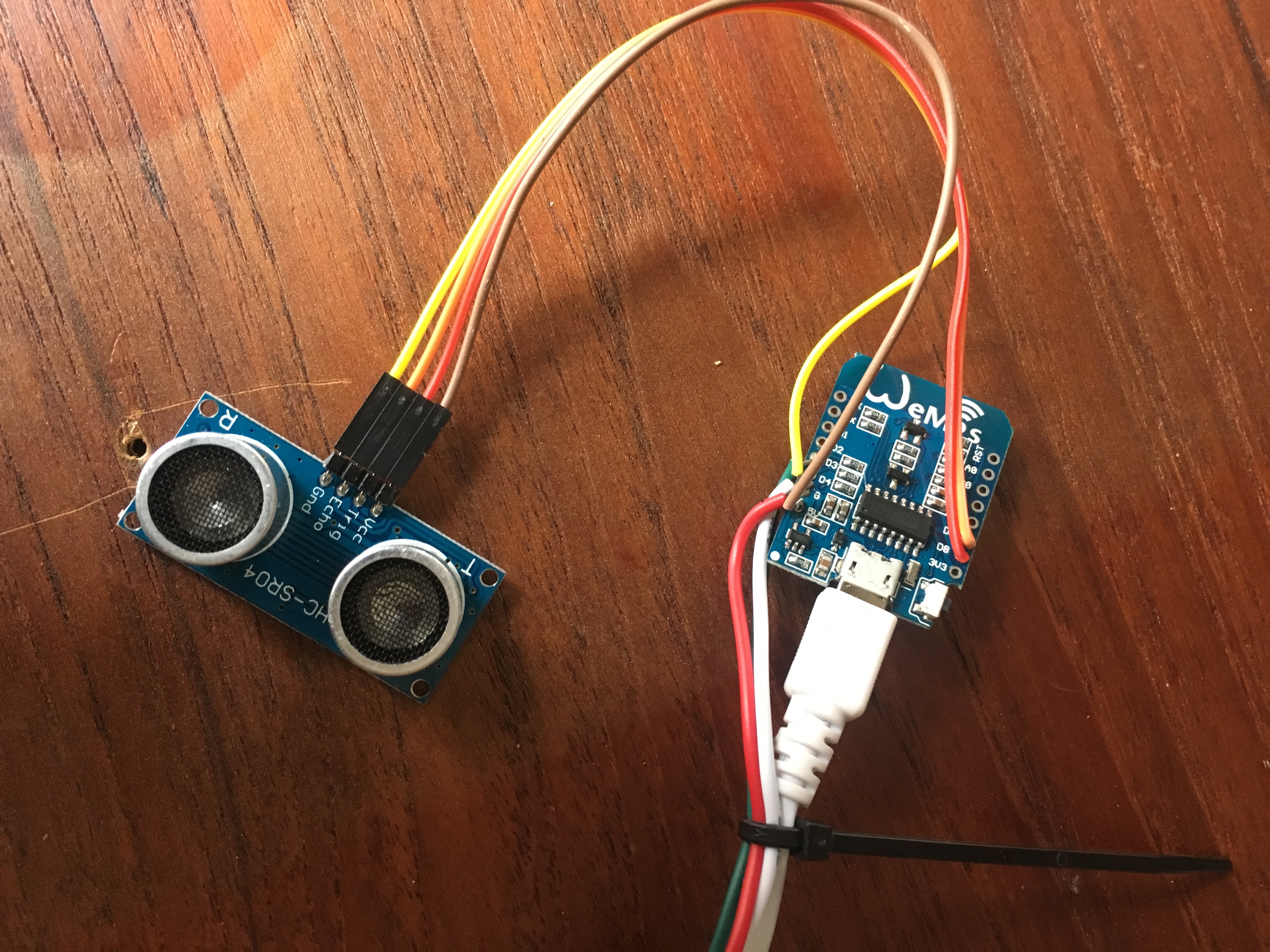 To enable the code to run with the Ultrasonic sensor change the 0 in the following line to 1.

Notice that the different type of range between the sensor and the colors requires us to map the range between them. The ultrasonic may sometimes return a larger value than the range so it is further necessary to constrain the value between 0 and 255.

Included with the download of the Arduino code is a nice laser cutting friendly enclosure to pack the wemos into. 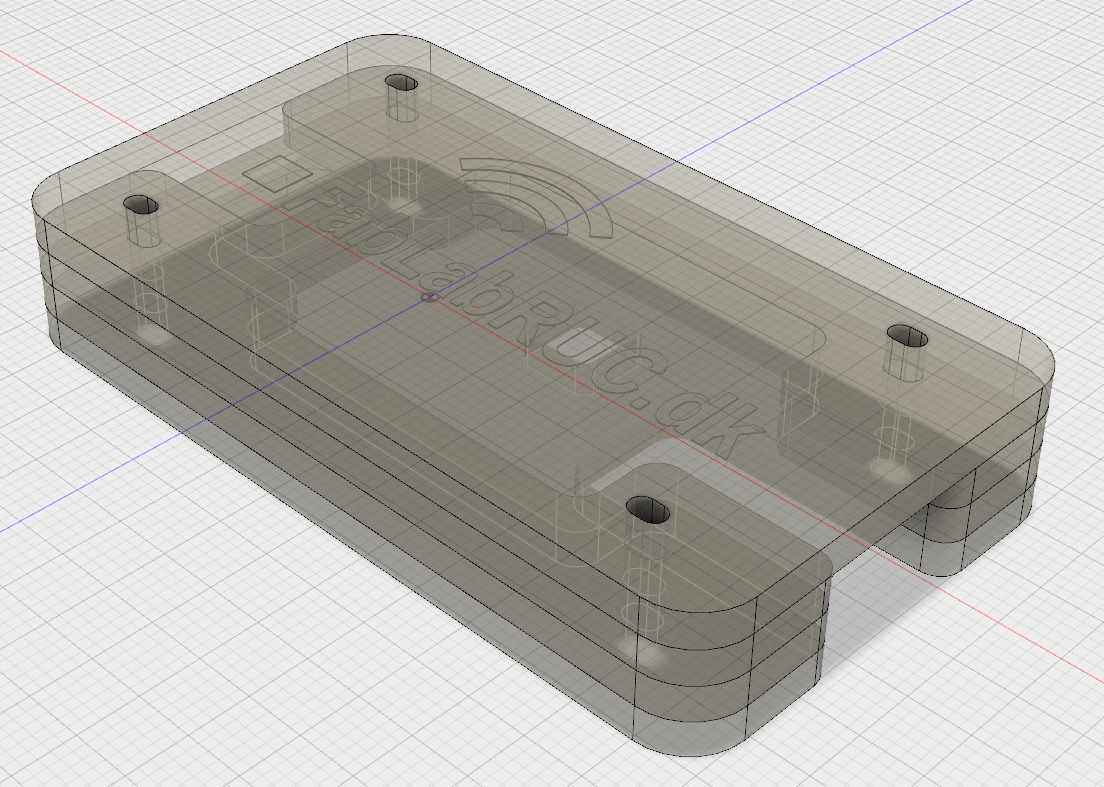 Use zip ties to clamp the layers together: 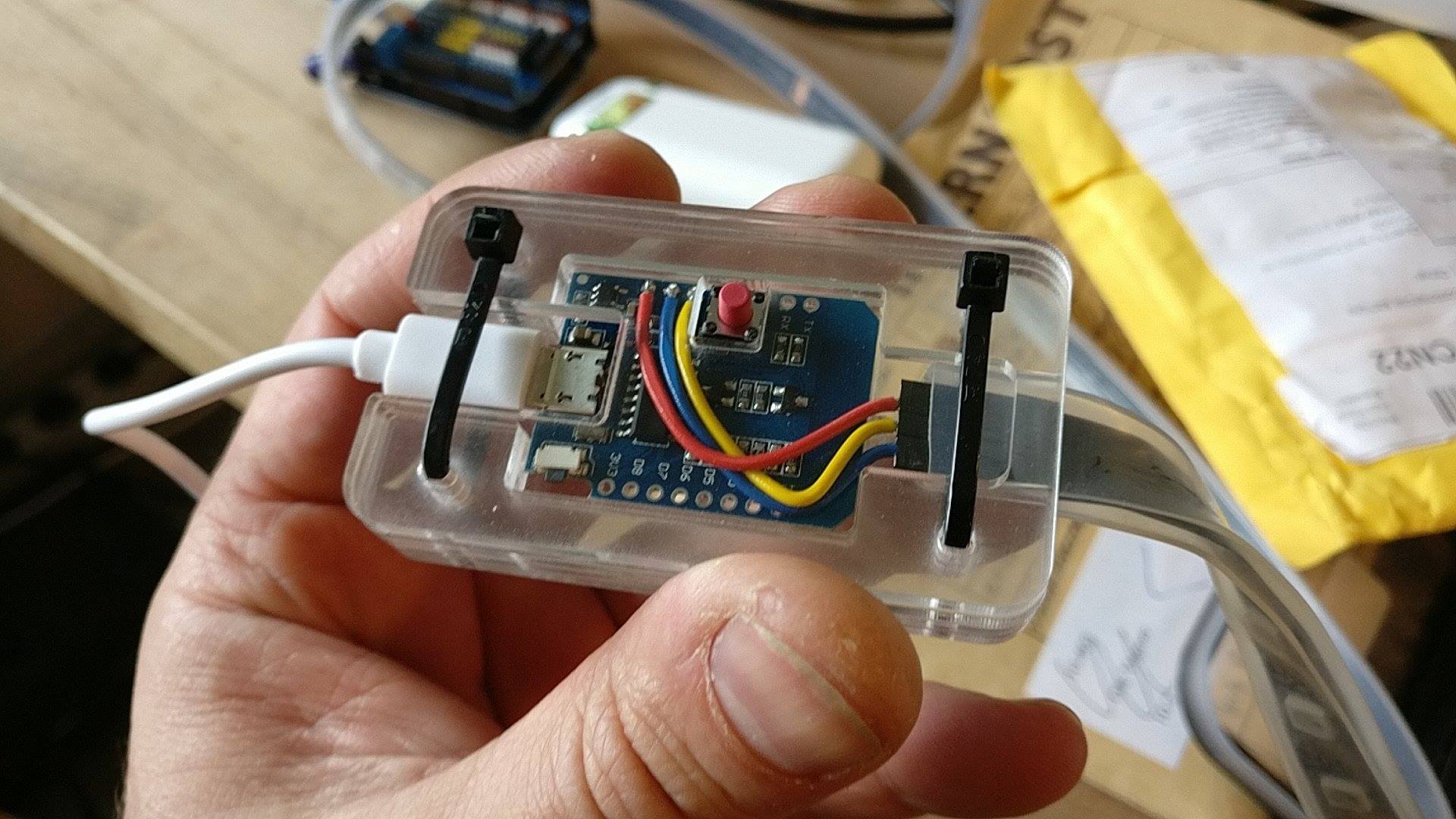